A 6-0 triumph over Elk River/Zimmerman puts the Huskies back where they won in 2020 and were runner-up in 2021.

A 6-0 triumph over Elk River/Zimmerman puts the Huskies back where they won in 2020 and were runner-up in 2021. 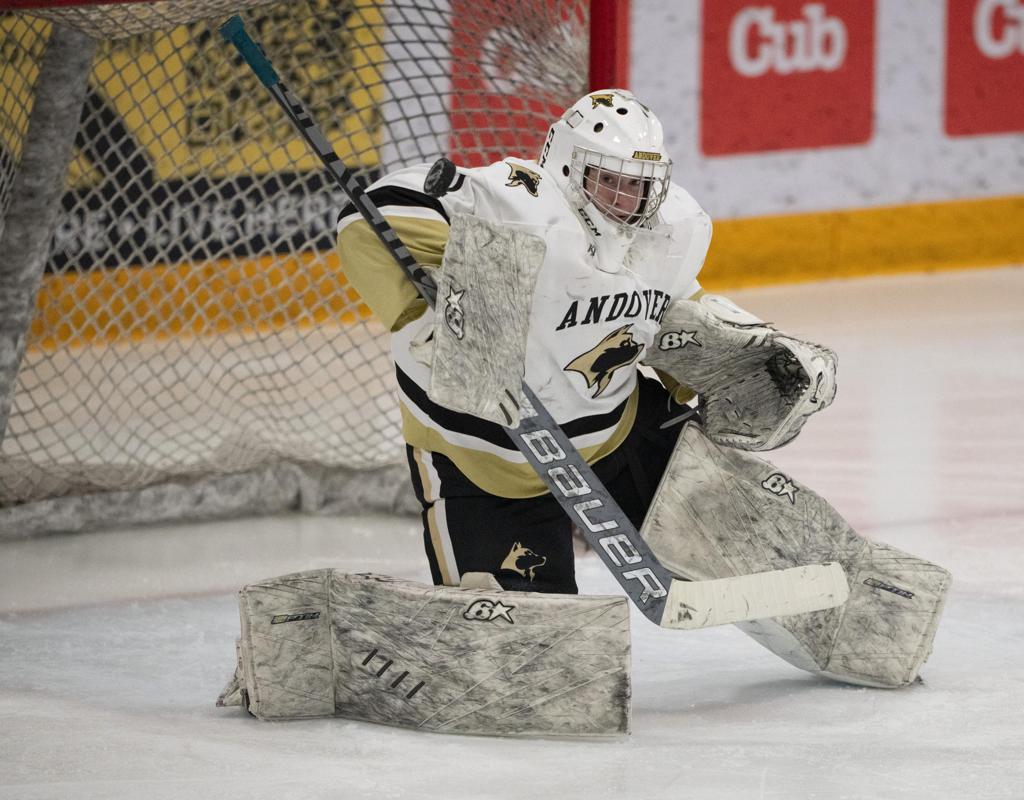 Andover goalie Courtney Stagman made a third-period save Thursday, part of a shutout of Elk River/Zimmerman. Photos by JEFF WHEELER, Star Tribune

Andover junior goaltender Courtney Stagman didn’t understand the attention given to her role in the Huskies’ 6-0 victory against Elk River/Zimmerman in Thursday’s Class 2A, Section 7 championship game.

“I didn’t do anything,” said Stagman, her eyes on the portion of the scoreboard that showed 14 Elks shots on goal.

Her performance warranted a closer look, especially her work early in the second period. Top-ranked Andover (27-0) only led 1-0 and started the second period with standout forward Isa Goettl in the penalty box.

The Elks sought to avenge a 5-0 loss to Andover in a Northwest Suburban Conference meeting on Dec. 18. Instead, the Huskies return to the state tournament having won it all in 2020 and then taking second last season.

Stagman’s key save led to her ninth shutout of the season.

“Yeah, that was a really fun save,” said Stagman, who improved to 24-0 this season. “Those types of saves are the highlights of a game.”

Seeing only 19 shots per game, many from the perimeter, requires Stagman to focus. Rehearsing made her sharp at the right time Thursday.

“We work a lot in practice on those situations,” Stagman said.

Watching from the penalty box, Goettl appreciated the help.

“I saw that and I was like, ‘Thank you, Courtney, thank you,’ ” Goettl said. “She’s very consistent. We can rely on her to make that first save.”

Goettl paid Stagman back with interest, scoring a power-play goal later in the second period for a 2-0 Huskies lead. She completed the hat trick in the third period.

Opposing coaches recognize Andover as a team with uncommon depth. Still, big players must deliver in big games. Goettl and the top line combined for all six of the Huskies’ goals. Madison Brown added two goals, and center Ella Boerger scored once. They have a combined 76 goals this season.

“They put in so much work so it’s a lot of fun to see them play well in games,” Stagman said.

Said Goettl: “We really came out hard and put a lot of pressure on their defense and goalie.”

The pressure shifts to Andover, which will get the tournament’s No. 1 seed. A year ago, an undefeated Huskies squad rolled through a COVID-19-shortened season, then fell to Edina in the championship game. Players feel better equipped to finish the job this time.

“I definitely feel a lot more confidence coming into the state tournament,” Stagman said. “I’ve got more games under my belt against better teams. And that’s really good because we have a young team this season. We all needed that competition.”