5 FINALISTS ANNOUNCED FRIDAY, WINNER TO BE ANNOUNCED AT A TIME TBD 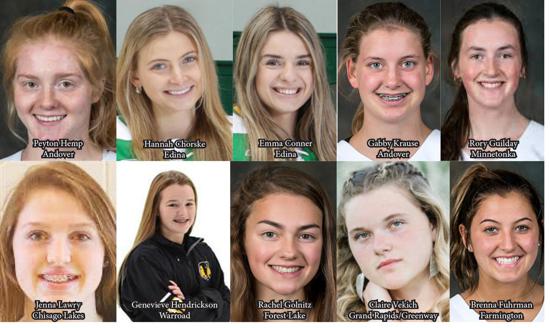 Let’s Play Hockey has announced the 10 finalists for the coveted Ms. Hockey Award.

The award is given to the state’s top high school female player. All 10 finalists are committed to play Division I hockey and eight of the 10 players will be playing in this week’s state tournament.

The list will be narrowed to five finalists on Friday with the winner being announced April 6 during a video presentation.

The 26th annual award, selected based on votes from a panel of high school coaches and Division I and III college coaches from Minnesota and Wisconsin. The award is sponsored by Let’s Play Hockey, the Minnesota Wild, and True Hockey.

Here are the 10 finalists:

Chorske, a Harvard commit, has racked up 27 points in 19 games for the Hornets who will look to get back on top after winning three state titles in a row before losing in last year’s title game to Andover. Chorske, the daughter of former Mr. Hockey winner and NHL star Tom Chorske, is in her fourth year of varsity hockey and has two state titles under her belt.

“With her vision and patience Hannah is someone we can rely on in many situations on the ice. She has the ability to score big goals for us when needed, but she also just does the little things day in and day out that help our team be successful. Hannah is a player that makes things look easy. She embodies everything you would want a player to have in order to help better the team every day.” – Edina Coach Sami Reber

Conner, a forward for the No. 2ranked Hornets, helped lead her team back to state by scoring a hat trick in the team’s 3-1 win over Benilde-St Margaret’s in the Section 6AA final. Conner enters the state tourney with 33 goals in 19 games, tied for second in the state with Andover’s Peyton Hemp. She is committed to the University of Minnesota.

“Emma is the definition of an extremely dynamic hockey player. Whether it’s scoring big goals, making clutch plays, blocking an important shot or just grinding to that final buzzer, Emma embodies all of those when it comes to hockey. She is easily one of the best, if not the best forward in the State. Her power, strength, shot, and overall skill is well beyond what you see at this level and it’s incredible to watch.” – Edina Coach Sami Reber 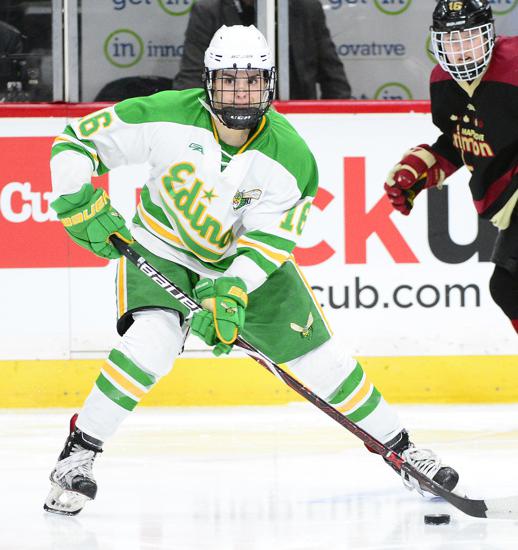 Emma Conner has netted 33 goals as she and Hannah Chorske lead the Hornets back to another state tournament.

Fuhrman is another supreme blue liner who cracks the top 10 out of Farmington, who is also headed to the state tournament with a Section 1AA win over Lakeville South. Furhman is a two-year captain and won a World Championship with Team USA’s U18 squad in 2020. She is in her fifth season on the Farmington varsity squad.

“Brenna is an absolute game changer.  She has the work ethic of no other player I have ever encountered. She has been a two- year captain for us and has the ability to bring her national team experiences back to the high school team for them to learn from. I can count on one hand how many times in her five-year career at Farmington that I have seen her been beat in a 1-1 or 2-1 situation.” – Farmington Head Coach Jon Holmes 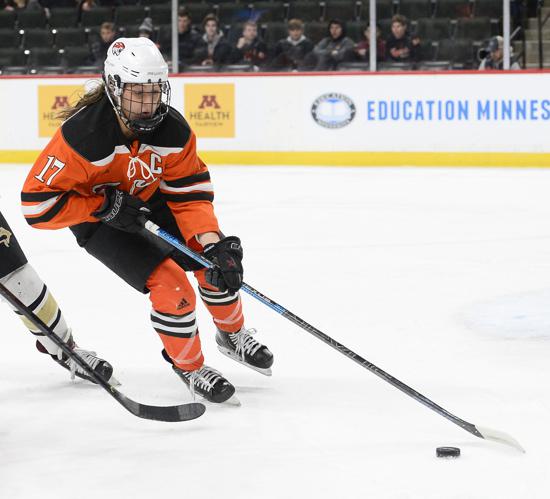 Brenna Fuhrman has led the Tigers to the state tournament.

Golnitz is a three-time all-conference player, a two-time all-state player and was a member of the U18 Team USA that won gold at the Women’s World Championships. She is a goal scorer and a playmaker and a top-tier defender. She is committed to Colgate University.

“She means a ton to our team, everything is run through Rachel. She plays extremely tough defensively and also brings lots of offensive firepower. She is the leader of our team on and off the ice and always leads by example. It can’t be overstated how important she is to our team and how much she adds overall. We would not be having near the success we are having without Rachel” – Forest Lake Head Coach

Guilday is another defenseman to make the top 10 list for Ms. Hockey. A four-year letter winner, Guilday helped lead the Skippers to the state tournament with a 4-1 win over Holy Family Catholic. She was one of only two high school-aged players selected for the Team USA Evaluation Camp this past October and helped the U18 Team USA squad to a Gold Medal in Slovakia at the World Championships. She is committed to play at Cornell next season.

“Her size, speed, strength, shot, puck handling skills, vision, and hockey IQ ranks her as one of the top players in the world at her age group. The plays she creates on rushes and in the offensive zone are spectacular. She is also exceptionally steady and solid on defense, which makes it difficult for opponents to create scoring chances against our team. Rory consistently shuts-down the State’s top scorers’ night in and night out along with her offensive contributions to our team.” – Minnetonka Head Coach Tracy Cassano

Another member of Team USA’s U18 squad who won Gold, Hemp is a dynamic forward for top-ranked Andover. Perhaps the most talented player on the most talented team, Hemp will look to lead the Huskies back to the title game . She has racked up 75 points (33g, 42a) this season. She is tied for second in the state in goals scored and leads the state in assists. She is committed to play at the University of Minnesota.

“It has been a privilege coaching Peyton. Peyton is known to be an elite goal scorer and an extremely gritty player. However, even more important is that she is the ultimate team player- always willing to put the team in front of herself. She is one of the most humble players I have ever seen (not coached, seen).” – Andover Head Coach Melissa Volk 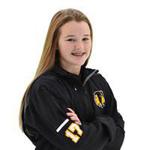 A two-time all-stater already, Hendrickson has helped lead Warroad back to another state tournament for the third consecutive year. Both years she has been named to the all-tournament team. Her 27 goals and 32 assists has helped lead the Warriors to a 19-1 record. She is in her fifth year as a varsity player and is committed to play at Franklin Pierce next season.

“Genevieve Hendrickson exhibits an upbeat presence both on and off the ice. Genevieve is mature, has an upstanding reputation, and strives to achieve at a high level . Her determination to succeed extends to academics, athletics, and community activities. Genevieve’s desire to continually improve, determination to excel, and sense of intrinsic motivation are recognized by her teammates and coaches.” – Warroad Head Coach David Marvin

Krause is a two-year captain for the top-ranked Andover Huskies as they eye a repeat of their Class AA title last season. She has scored 24 goals and added 34 assists as the Huskies ride a 27-game winning streak into the state tourney. She is committed to play at the University of Minnesota-Duluth.

“Gabby is one of the most elite players I have had the privilege to coach. You can put her in any situation and she will excel! She understands the game at an extremely high level and will literally do whatever is best for the team whether it is scoring a game winner or blocking a shot. Scores extremely clutch goals for us, 2 year captain on a very successful team.” – Andover Head Coach Melissa Volk 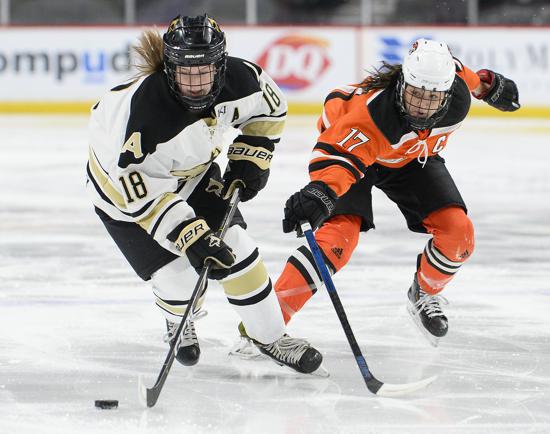 Gabby Krause is chased by fellow Ms. Hockey semi finalist Brenna Fuhrman. Both players have led their teams back to the state tournament.

Lawry helped lead her squad to the top of the rankings this season and to the state tournament. She has been playing varsity hockey for Chisago Lakes since she was a seventh grader and set the all-time school scoring record for sophomores and juniors and has totaled 228 points in her high school career. She has 28 goals and 26 assists so far this season. She had a goal and assist in the Lakers section final overtime win over Orono. Lawry will continue her hockey career next season as a member of the University of Minnesota-Duluth.

“Her efforts are always above and beyond not only in games, but also in practices and she encourages her teammates to do the same. In terms of her attitude, she loves to laugh and have fun, but when it is game time, she is all business. Jenna is extremely tenacious in helping others succeed, which I believe is why she is so successful herself.” – Chisago Lakes Head Coach Dave Burgen

A testament to Vekich’s athletic ability occurred when volleyball season was shortened due to Covid-19, she picked up a tennis racket and ended up No. 2 singles on the team. She is an all-state athlete in three sports – volleyball, hockey and softball. This year she has netted 32 goals and added 30 assists and is currently fourth in the state with 62 points in just 21 games.

“Claire Vekich is a rare, once-in-a-generation athlete. Her consistency, scoring at least 20 goals and 40 points through her junior season is evidence of a dominant power forward – all while being a stalwart defensively against other top players. Further, Claire is a top-notch person, student and 3-year captain for GRG Hockey. Her disposition and work ethic are a role model for her peers. She is truly one of the best-ever people, athletes, and hockey players I have witnessed.” – GRG Head Coach Brad Hyduke