Andover overpowers Eastview 7-0 to set up 2A title defense

Andover overpowers Eastview 7-0 to set up 2A title defense

The Lightning kept the score close for two periods before the Huskies scored five times in the third period. 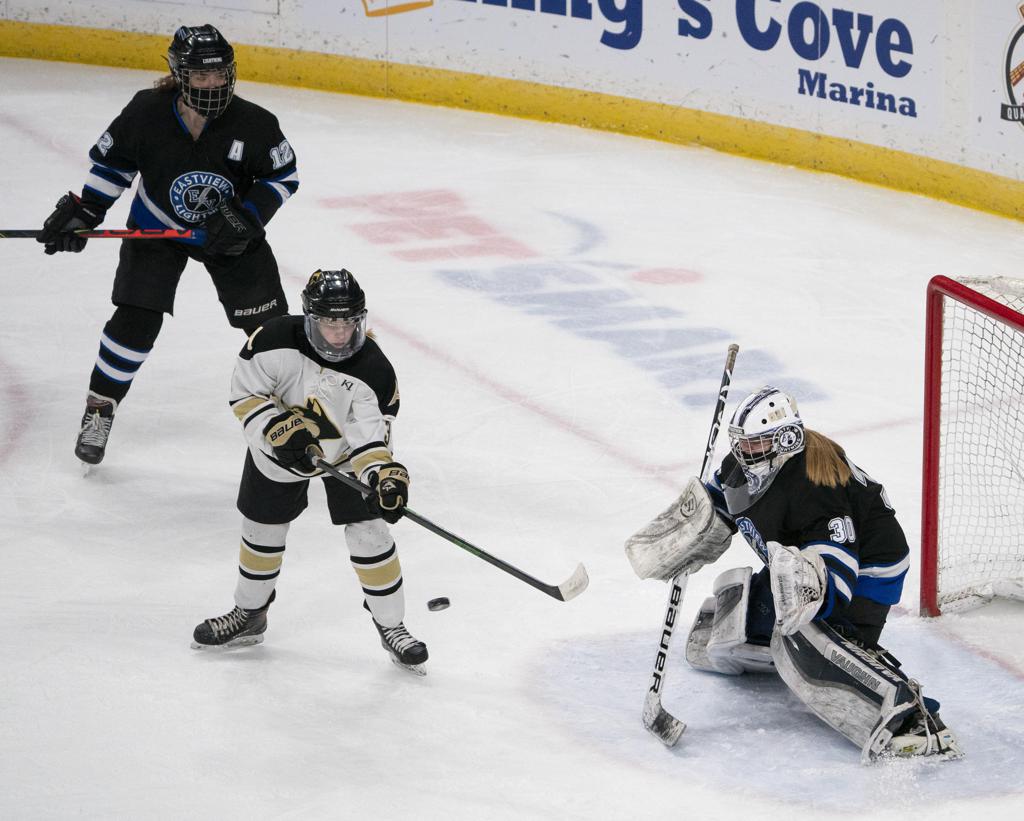 Andover girls’ hockey coach Melissa Volk made a rare demand of her players, holding a two-goal lead after two periods, to dig deeper.

“We needed a little gut check,” said Volk, less concerned with scoring numbers than player effort, though aware the two are typically related.

Andover responded with a defending state champion’s pride, pulling away from Eastview in a 7-0 victory on Thursday in a Class 2A semifinal.

The Huskies earned a championship game rematch with Edina. The two undefeated powers faceoff at 1 p.m. Saturday at Xcel Energy Center. The game features a combined 16 players committed to Division I hockey programs.

Eastview goalie Angie Lombardi did her best to spoil the party. Andover (22-0) outshot the Lightning (16-5-2) by a 37-9 margin through two periods but led only 2-0.  Goals from Madelynn Jurgensen, her 14th of the season, and Madison Brown (18th) built the lead.

When the Huskies blitzed Eastview for five goals in the third period, Lombardi, who finished with 41 saves, wasn’t to blame.

“Those pucks that went in — no one in the state is stopping those,” Lightning coach Herb Harvey said.  Madison Clough blasted her 10th goal of the season for a 3-0 Andover lead. Peyton Hemp assisted on the goal, giving her a school record 45 assists this season.  Then Hemp, the Class 2A leader in points, scored a goal of her own for a 4-0 Andover lead.

“She’s a selfless player,” Volk said of Hemp, a Ms. Hockey Award finalist. “She has set these records this season but all she really wants is the team to get a win.”

Sophomore goaltender Courtney Stagman earned her 10th shutout of the season. Andover has outscored its opponents 193-7 this season.