Huskies goalie Amanda Pelkey anchored her team's second-straight shutout while her teammates broke a 0-0 tie in the third period to defeat the Crimson.

Andover senior goaltender Amanda Pelkey spent the last three seasons backing up now-graduated Cassidy Stumo. This year is Pelkey’s first season as a regular starter in net for the Huskies.

How is she doing? Well, she’s riding a shutout streak of 124 minutes, 45 seconds after her second-straight shutout for the undefeated Huskies, a 3-0 victory over Maple Grove on Tuesday at Maple Grove Community Ice Arena.

Being the No. 1 goalie is definitely more fun, Pelkey said.

“I love being able to play in these big games like this,” Pelkey said. “I feel a lot more pressure now that I’m actually going out to play, instead of Cassidy going. But I wouldn’t trade it for anything. It’s amazing.” 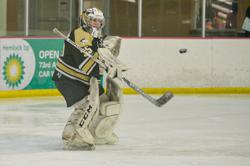 She helped keep Tuesday’s game scoreless through the first two periods in the battle of unbeatens and Northwest Suburban Conference rivals. It was the sixth shutout of the season for the Huskies (13-0-0, 9-0-0) as they handed the Crimson (9-1-1, 6-1-0) their first loss.

Pelkey made 18 saves and improved to 11-0-0, lowering her goals-against average to 0.818. She’s allowed just nine goals this season for a .946 save percentage. Andover as a team, meanwhile, has outscored opponents 84-9 as a team, allowing 0.69 goals per game.

With the game still 0-0 in the third period, junior winger Peyton Hemp, who’s part of Andover’s dynamic top line, was buzzing with scoring chances. When the Huskies, ranked No. 1 in the Class 2A coaches’ poll, got their first power-play chance, Hemp shot the puck into the goaltender’s glove, which was at least Hemp’s third solid scoring chance of the period.

Next time she got the puck, she capitalized.

Hemp switched places with senior center Jamie Nelson and took the faceoff in the No. 6-2A Maple Grove end. Hemp took the puck to the net and scored the unassisted power-play goal — her 13th goal of the season — only 23 seconds into the power play and with about 11 minutes left in regulation to break the tie.

“It felt really good to be that person to get that goal for the team,” Hemp said. “Our team was really happy and kept going off of that.”

With Hemp’s goal giving the Huskies a lead, there was some relief on the other end of the ice, too.

“Oh, for sure,” Pelkey said. “There’s so much pressure lifted off when we get that first goal.”

That was all Andover needed. Junior Madelynn Jurgensen made it 2-0 with 6:27 to play when she cleaned up a rebound near the crease. An empty-netter with 39.7 ticks remaining sealed the deal.

A game like this is good preparation for the section playoffs and perhaps the state tournament, a place the Huskies hope to return after finishing fourth last year following an overtime loss to Brainerd/Little Falls in the Class 2A semifinals.

In the first two periods, play was pretty even with each team generating scoring chances. Pelkey made a few key saves, including stopping Maple Grove junior Lauren Stenslie’s shot in tight off a 2-on-1 chance with 9:21 to play in the first period.

It was more of the same in the second period. As the Huskies cycled the puck on offense in the middle of the period, it forced the Crimson to ice the puck a few times.

In a close game, there are definitely nerves, Pelkey said. But she trusts her defensive core to help her out.

“Our D zone has been working really well in the past few games,” Pelkey said. “That’s definitely a big factor.”

Hemp said they have “the best D core in the state, probably” before also referring to Pelkey’s play as having a “brick wall back there.”

For Pelkey, it’s all the hard work in practice each and every day that has helped her this season.

“She’s really stepped into her role as our starting goalie,” Volk said. “And she’s doing a great job of really just competing back there for us.” 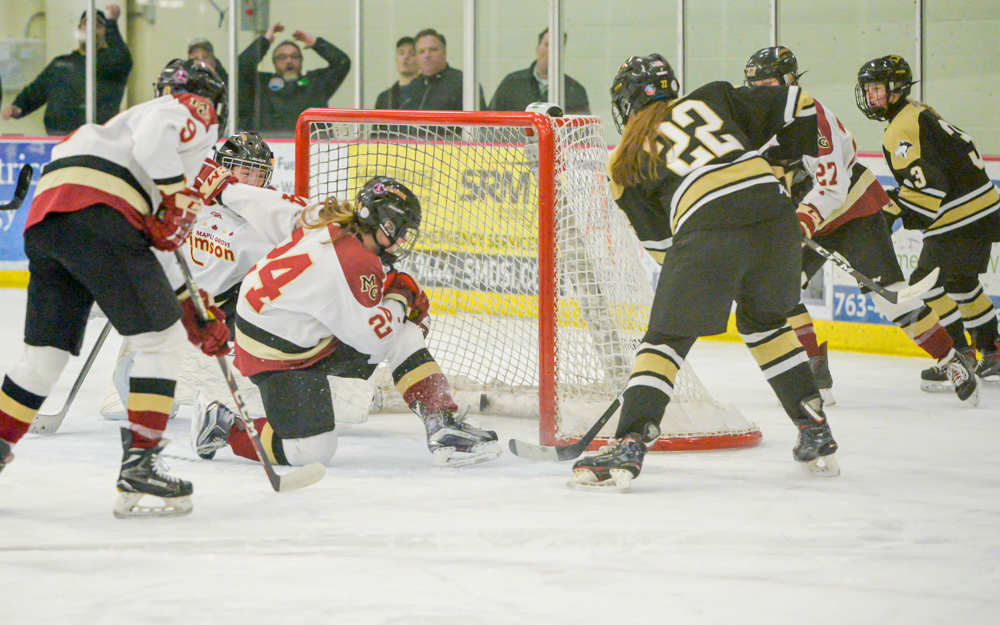 In a battle of unbeatens, Andover got its lucky 13th victory to remain perfect this season.

The Huskies (13-0-0, 9-0-0) defeated Maple Grove 3-0 for their sixth shutout of the season — their second in as many games — in a battle of Northwest Suburban Conference rivals Tuesday at the Maple Grove Community Ice Arena.

The Huskies, ranked No. 1 in the Class 2A coaches’ poll, have now outscored opponents 84-9; Andover came in allowing 0.75 goals per game while scoring an average of 6.75 goals per contest.

The game was scoreless into the third period. Huskies junior winger Peyton Hemp had already been buzzing around the offensive zone with her teammates early in the third. When they got their first power play, she shot into the goaltender’s glove, which was at least her third solid scoring chance of the third period.

Next time she got the puck, she capitalized.

Hemp scored an unassisted power-play goal right off a faceoff only 23 seconds into the power play and with about 11 minutes left in regulation to break the scoreless tie. It was Hemp’s 13th goal of the season and her 32nd point, a category where she ranks among the state leaders.

Andover junior Madelynn Jurgensen made it 2-0 with 6:27 to play when she cleaned up a rebound near the crease. An empty-net goal came from freshman Isa Goettl with 39.7 seconds left.

Both teams are coming off Class 2A state tournament appearances last season. Though both teams are searching for another step forward; Andover took fourth after an overtime semifinal loss, while Maple Grove won the consolation championship. Neither team has won a girls’ hockey state title. 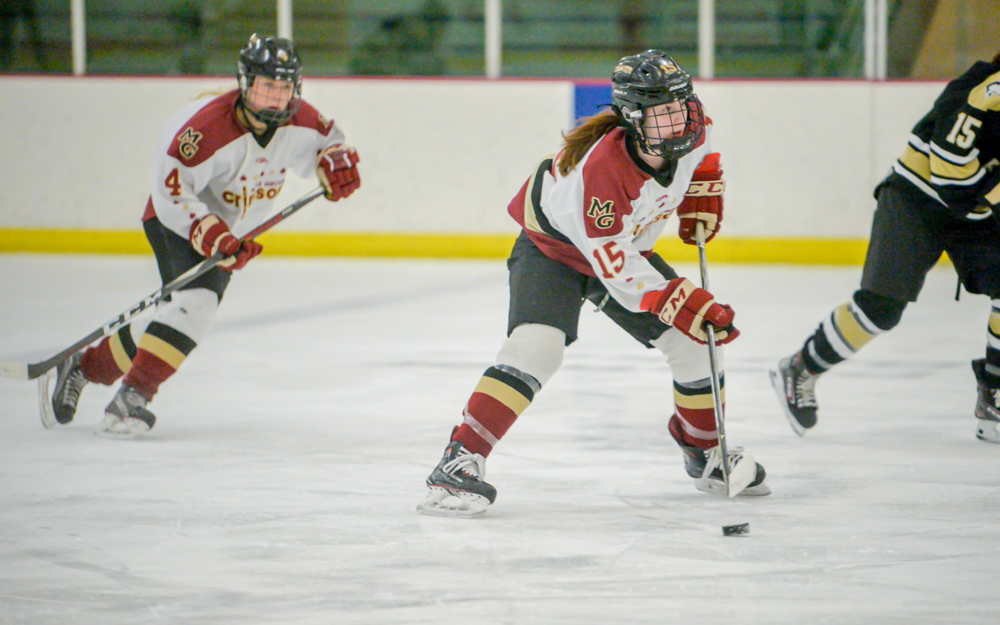